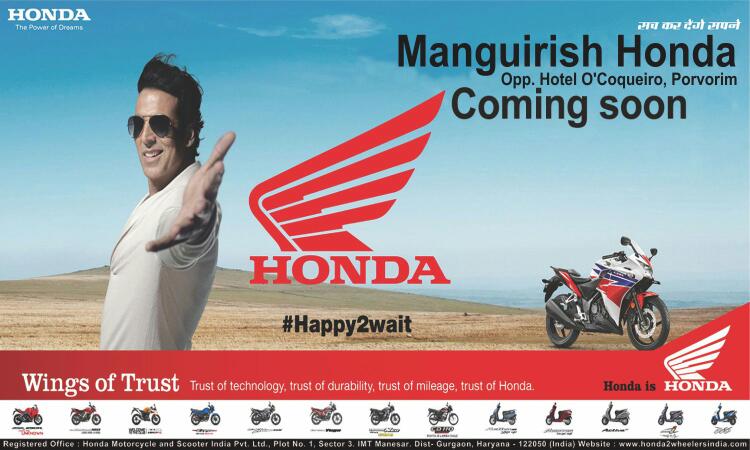 The new dealership is expected to start operations from 28th of April and is located opposite O’Coqueiro hotel.

Manguirish Honda will be the fourth Honda 2 Wheeler in Goa after Counto Honda, Goa Rajee Auto and Priority Honda.

Honda 2Wheelers India has grown more than double the growth of the industry. Fastest ever scale up to 5 million unit annual sale in the history of Indian two-wheeler industry and the company is gearing up for the next big leap to 6.0 million.

Honda Activa continues to lead the industry as the highest selling two wheeler while in 125cc segment, Honda CB Shine is leading the pack.

In the Goan market, Honda Activa too leads the scooter segment. Honda 2Wheelers holds the No.1 position in Goa and enjoys a market share of 45%

Honda Motorcycle & Scooter India has introduced their second mass segment motorcycle, Dream Neo in the Indian market. The new 110cc motorcycle is based on the Dream Series platform and will compete with the world’s […]

Honda Motor Co., Ltd. announced that the all-new CR-V would go on sale at dealerships across Japan on December 2. Introduced in 1995, the CR-V pioneered a completely new SUV market with its original combination […]

Honda plans to up the ante in the Indian market. The Japanese car maker is planning to launch more affordable models. The Brio was the first to be the cheapest in the Honda portfolio. Looking […]