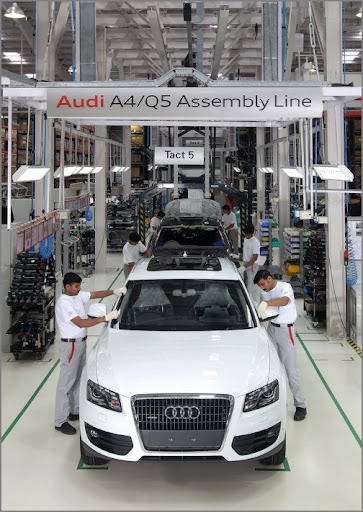 Audi has started assembly of the Q5 model in Aurangabad. The sporty SUV is the third Audi model after the A4 and A6 to be produced in India, increasing the production volume this year to more than 2,400 units, compared with 732 vehicles in the preceding year.

Assembling cars in India could help auto makers reduce import duty from 115% to 60%. Audi plans to assemble 1,500 units of Q5 models in future. Altogether Audi has produced around 2,000 cars in India since the start of production in September 2007. By 2015 up to 6,000 units will be rolling off the line each year.

“The production of the Audi Q5 is part of our long-term growth strategy in India,” says Frank Dreves, Audi Board Member for Production: “The Indian market for automobiles will grow very rapidly, and the Q5 is the right automobile at the right time.” Final assembly of the Audi Q5 takes place in five work cycles on two assembly lines alongside the A4 and A6 at the Volkswagen Group’s Aurangabad plant.

Audi is currently offering the Audi Q5 with a 2.0 TFSI and the 3.0 TDI engines. Further efficient engines will follow shortly.

Audi has been represented in the Indian market for four years now. In the spring of 2007, a separate sales company based in Mumbai was opened to manage all Indian market activities. In addition to the locally produced Q5, A4 and A6 models, Audi also offers its Indian customers the Audi A8, Q7 and TT, as well as the R8 supercar.