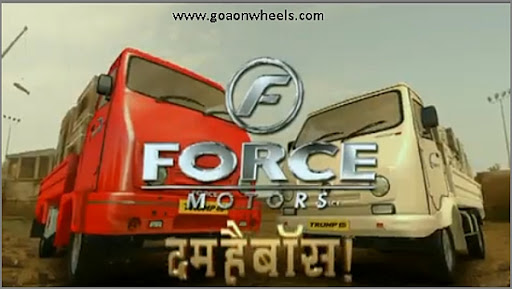 Force motors may be known as a small player so far, but not nay more from now. Force motors have entered the Light commercial segment with two new products Trump 15 and Trump 40.

Force Motors has roped in Salman Khan and Sohail Khan to feature in its new television commercial, which talks about the company’s latest entrants to the small commercial industry – Trump 15 and Trump 40.

Trump 15 and Trump 40 which have a capacity to carry loads from 790 kg to 1100 kg respectively as a range that is tough, rugged and stylish. Also Force Motors has a heritage of making vehicles that are strong, reliable and fuel efficient.

A large loading area allows the buyer to carry more loads in lesser trips and hence earn more. Force Motors is now poised to emerge as a significant player in both the light commercial as well as heavy commercial vehicle industry in India.

Chevrolet to launch BS IV version of Tavera in 2011

Toyota Q world auto show is coming to Goa on the 2nd of May at Kala Academy, Panjim form 11 am to 8 pm. Toyota will be previewing its Etios concept both the hatch and […]