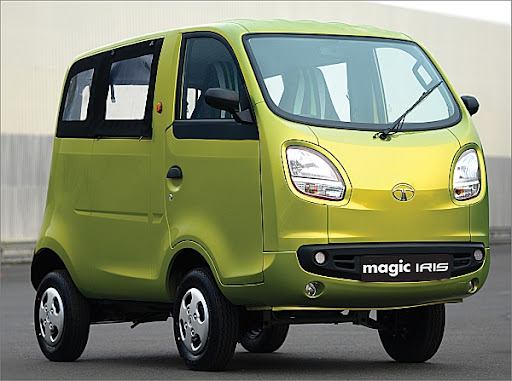 The Magic Iris was unveiled at the 2010 Delhi auto expo.

The Tata Magic Iris comes with a 611cc single cylinder diesel engine with 11 hp power and 31 nm of Torque with a top speed of 53 kmph. The Magic Iris has 4 forward+1 reverse gears with Hydrualic drum type of brakes .

The Magic Iris will be built at Tata Motors Pantnagar facilty which makes the Ace and Nano.

Tata Motors plans to launch three variants of Prima, a world truck platform, in the next two months. The company has started production of the variants at its Jamshedpur plant. Tata will be launching two […]

Tata Nano to drive in Dhaka!!! Launching soon in Bangladesh

Tata Motors are set to launch the Nano small car in Bangladesh from early next month, according to the local distributor. Abdul Matlub Ahmed, chairman of Nitol-Niloy Group said that the  plan to import up […]

Tata Motors drives in Zest Sportz Edition to celebrate 50,000 units sold all over India and 2 years in the market. Launched 2 years back, the Zest was the first model in the Tata model […]