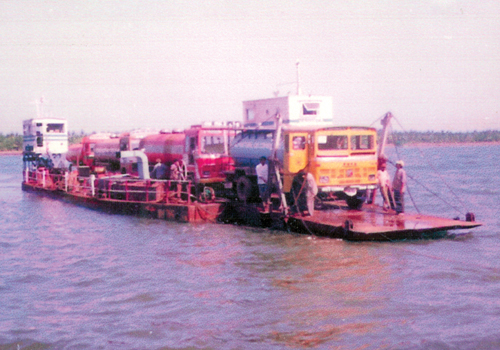 Goa is all set to get its first roll on-roll off (Ro-Ro) ferry service across the Zuari river between Cortalim and Agassaim and the ferry service is expected to become operational by June 2011 even as various government departments are working on creating the necessary infrastructure on both sides of the river.

The Ro-Ro services will benefit heavy vehicular traffic which is currently banned from crossing the Zuari bridge.

Sources in the river navigation department informed that the proposal for the Ro-Ro ferries was first put up by the Goa Chamber of Commerce and Industry way back in 2005 as the Zuari bridge was closed for heavy traffic.

The Ro-Ro ferry service will help in de-congesting the heavy traffic on the Cortalim-Ponda road, providing relief to the Borim bridge. Also with the introduction of the services commercial vehicles coming towards Panaji via Borim would be benefited as the distance will be reduced by around 50 km, thus saving fuel and time.

There will be two such Ro-Ro ferries on either side of the Zuari river and will operate on build, own and operate basis. The river navigation department source said that before the ferry services become operational a lot of work needs to be done to improve the infrastructure on both sides of the river.

Audi has launched a limited edition of the diesel version of its Q7 sports utility vehicle at a specially discounted price of Rs. 58.68 lakh (ex-showroom Mumbai), which is Rs. 7.45 lakh less than the […]