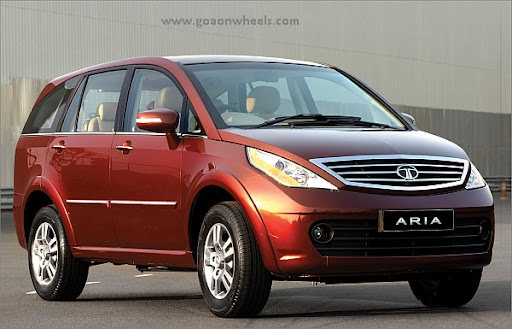 The much awaited car form Tata, Aria will hit the roads in the 3rd week of August. This is exactly 2 weeks before the festive season of Ganesh Chaturti.  According to TeamBHP the Aria will be launched in 3 variants. A base 4 X 2 variant, high end 4 X 2 variant and a 4 X 4 version is expected.

The Tata Aria, first shown as a concept at the 75th Geneva Motor Show in 2005, blends the functionality and comfort of a mid-range multi-purpose vehicle (MPV) with the all terrain assurance and premiumness of an SUV.
Its 2.2 Litre Direct Injection Common Rail (DICOR) diesel engine, delivering 140 PS power and 320 Nm torque, is mated, in the 4×4 option, with an all-wheel drive with torque on demand, which senses and distributes torque to the wheels in accordance with the terrain. Dual mass flywheel reduces NVH to the bare minimum level.

The Aria will get Luxurious features comprising 3d surround sound, dimming roof lamps, in-dash built in GPS with a state-of-the-art infotainment system, multifunctional steering wheel, dual air conditioning with automatic climate control and cruise control. The plush and spacious interiors come with three rows of theatre style seating. The second row slides and inclines, and the third row can fold flat along with the second to yield a large storage area.

It boasts of top-of-the-line features like 6 airbags and ESP, offered by an Indian OEM for the first time. A chassis frame, constructed with advanced hydro formed members, coupled with a stiffened body cage, dual zone collapsible steering and airbags make the Tata Aria one of the safest vehicles in an exigency. It meets EEC safety regulations, which includes full frontal crash, offset crash and the side pole tests.

Launched in October, the Safari Storme was certainly proved to be the dark horse for Tata Motors which has seen sales slump in the last couple of months. The Mahindra XUV and Renault Duster are […]

Well it’s just a couple of days the CBR 250R has hit the Goan streets and we at Goa On Wheels were able to test ride the new bike. Let us first start with a […]