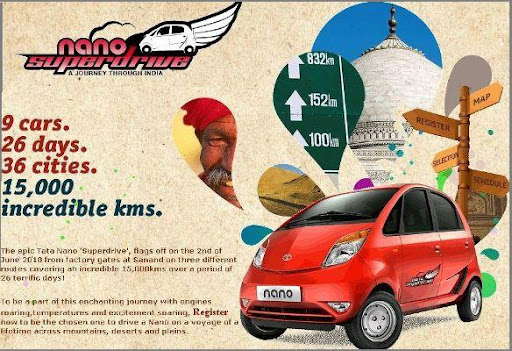 On June 2, the day it inaugurates the Rs. 2,000-crore Nano mother plant at Sanand, Tata Motors will flag off a 12,000 km Nano rally from the plant. The rally, probably the longest undertaken by any Indian car manufacturer, will pass through 40 cities in 20 states.

To be a part of this enchanting journey with engines roaring, temperatures and excitement soaring, Register now to be the chosen one to drive a Nano on a voyage of a lifetime across mountains, deserts and plains.

On June 2, Ratan Tata and Gujarat chief minister Narendra Modi will flag off three groups of Nano cars from Sanand. Sources close to the developments said that Tata wants to reiterate that Nano is a robust and safe car through this long drive.

It is learnt that three groups with three Nano cars each will travel 12,000 km across the country under the title ‘Super Drive’. The caravan is expected to consist of cars with designs based on themes like sports and music.

Three groups, to be flagged off in Gujarat, will drive on separate routes towards north, south and east. During the drive, the cars would cover almost all the landmarks on the way in 40 key markets of the country.

Team Tata is also trying to get prominent personalities at the venues where caravan would stop by. Super Drive is aimed at creating greater visibility for Nano as only a limited edition has been plied on the road since its launch last year,” said the source. He claimed that a 12,000-km long drive by Nano would convince potential customers about the car’s strong performance and safety.

It is expected that Tata would also offer test drive to a select group of people to give them a chance to experience Nano and an opportunity to get associated with a mega-event like Super Drive. Each group with three Nano cars will be accompanied by two vehicles besides a van and SUV carrying support crew. Interestingly, the caravan will also include bloggers, videographers and photographers.

The group heading south will pass through Surat, Mumbai, Pune, Goa, Bangalore, Kochi, Chennai, among others. Another group would pass through cities like Jaipur, Chandigarh, Delhi and Agra in the north. Third group will travel through Bhopal, Patna, Kolkata, Bhubaneswar, Hyderabad, besides many other prominent centres.

Tata Motors unveiled its all new ‘Tata 407 Pickup’ and the new offerings from the Ace Platform – ‘Tata Super Ace’ and ‘Tata Ace EX’- across the country.The introduction of these new products- Tata 407 […]

Tata Motors’ announced  AMP Motors as the new Jaguar Land Rover dealership in New Delhi – only the second outlet in the country beyond the first flagship store in Mumbai.