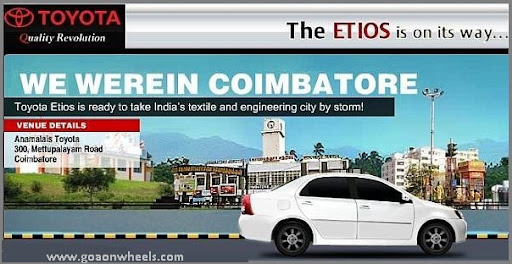 Toyota Kirloskar Motor held the Toyota ‘Q’ World in Coimbatore  at Anaamalais Toyota, 300 Mettupalaya Road.  The participants included people from all walks of life, eager to see the much-awaited concept model of Toyota’s new compact car – Etios.  The event swept a wave of excitement across Coimbatore, with car enthusiasts and potential customers actively participating in it.

With the Etios concept – ‘World First, India First’, Toyota is set to enter the mass volume segment. To ensure maximum accessibility to the customers, Toyota will expand its sales/service network to about 150 dealers by the end of 2010. Innova and Fortuner are the market leaders in their segments in Coimbatore with a market share of 34% and 58% respectively.

The exhibit included an exciting array of  8 vehicles which gave them a never before ‘touch and feel experience’ of Toyota vehicles. Toyota Etios concept was the highlight of the event.

The vehicles symbolized the following themes – Eco Friendly, Concept Car and the Toyota Line Up. The exhibit included the newly launched Etios concept and many more interesting and exciting vehicles in the current line up of Toyota products namely, The newly launched Prius – world’s highest selling hybrid vehicle, Newly launched Prado Diesel, Most popular vehicle in the SUV segment – Fortuner.

Exclusive customer engagement events were also held for fun and entertainment of the visitors. After the huge success of the first phase of Toyota ‘Q’ World, the event will now travel to 15 other cities, namely Calicut, Goa, Hyderabad, Vijaywada, Coimbatore, Bhubaneswar, Kolkata, Siliguri, Guwahati, Varanasi, Ludhiana, Jalandhar, Jaipur, Indore and Surat. The event will span a period of months.

Toyota has dropped the first teaser of soon to be launched Urban Cruiser compact SUV. The new Urban Cruiser is the 2nd model from the Suzuki partnership and is based on the Vitara Brezza, however, […]

Toyota’s most successful MUV Innova is going to a new avatar. Toyota Indonesia will be giving the Innova a facelift before the new model is expected in 2013. The Innova did some very minor update […]