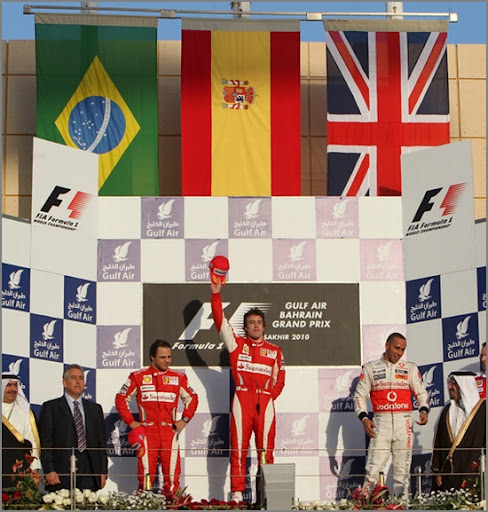 A one-two finish for Fernando Alonso and Felipe Massa kick started the new F1 season in favour of Ferrari on Sunday. Lewis Hamilton was third for McLaren Mercedes.

The leading trio all benefitted from the sudden loss of power caused by an exhaust problem that dropped polesitter Sebastian Vettel to fourth at the finish, after his Red Bull Racing Renault had easily led the first two thirds of the 49-lap race.

Michael Schumacher, making a much-heralded return to racing after a three-year layoff, finished a steady sixth, one place behind his Mercedes team mate Nico Rosberg who showed no deference to the 41-year-old seven time world champion.

There were no big surprises in the opening race of the F1 season, which was something of a disappointment given that the regulation change banning refuelling and the arrival of three new teams was expected to produce the unexpected.

Since alcohol is forbidden in the Kingdom of Bahrain, the sweaty trio on the podium swigged and sprayed a fruit juice concoction, which seemed appropriate for a race that lacked fizz but was nonetheless entertaining.

The result gives Ferrari the perfect start to the world championship with 43 points, ahead of McLaren on 21, Mercedes GP on 18 and Red Bull on 16. Alonso leads the title chase with 25 points from Massa on 18, Hamilton on 15, Vettel on 12, Rosberg on 10 and Schumacher on 8.

Australian Mark Webber has taken over at the top of Formula One drivers’ standings after a line-to-flag victory in the Monaco Grand Prix — the sixth race in the calendar. Webber followed up his all-the-way […]