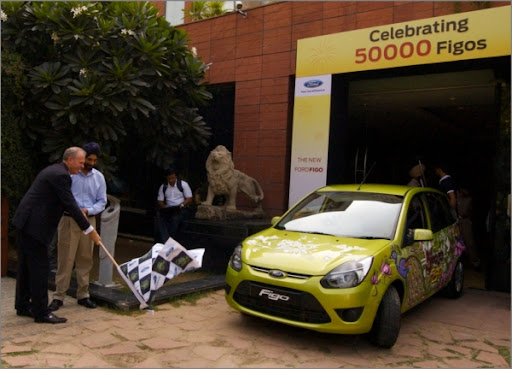 Ford India has a lot to celebrate during the festival season. In October it had its second highest sales month this year, selling 9,026 units an increase of 161% from October 2009. Ford India had sold 3458 units the same month last year.

From January to October 2010 (YTD), the company sold 72,078 units, an increase of 183% over the 25,386 units sold during the same period in 2009. Figo crossed a significant milestone by selling 52,644 units since its launch and has emerged as the preferred choice for customers seeking value-for-money. Ford nameplates Fiesta, Endeavour and Ikon also witnessed strong sales from the customers during the month.

Ford are delighted to see Figo cross the 50,000 sales milestone. Figo’s value-for-money proposition has found resonance in the market. Ford also extended its footprint in the Indian sub-continent with the opening of a new dealership in Kathmandu, Nepal. Nepal is the second export market for the Figo apart from South Africa.

To further strengthen its service support, Ford India has expanded its sales and service network by opening two more new dealerships in Pathankot and Bengaluru in October. The company’s dealer network has gone up to 169 across 98 cities in India.

Ford have finally managed to get decent numbers, thanks to Figo. Ford Figo have managed to sell 16,000 cars in just 4 weeks from launch and has received over 21,000 bookings on hand. Looking at […]