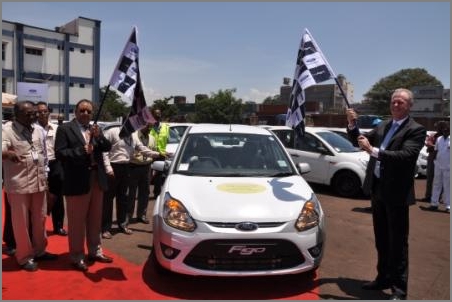 “In addition to being a sales chart topper, the Ford Figo is the first small car to be produced and exported by Ford India and today’s consignment of 1,200 Figos to South Africa is a new exciting development for us.”

He added, “Given the rising demand worldwide for compact vehicles, we plan to accelerate our export strategy to not only enhance our business growth but also to further embellish India’s reputation as a major regional auto manufacturing hub.”

Ford India will export the 1.4L petrol and diesel Figo variants to Ford Motor Company of Southern Africa who plan to deliver the vehicles to their network of 123 dealerships by mid July.

Ford plans to give their butch SUV, the Endeavour a facelift. Restyled headlights and a new chrome grille are the highlights of the redesign. Ford has already launched it in neighbouring markets like Thailand, and […]

? Ford India is riding high on the success of the Figo. The small car has helped Ford India to clock 7,319 units in April with the major share contributed by the Ford Figo. The […]

In the last few months car companies may have witnessed a surge in sales with consumers buying more cars and also companies planning new launches. Well there is some bad news now, car companies are […]