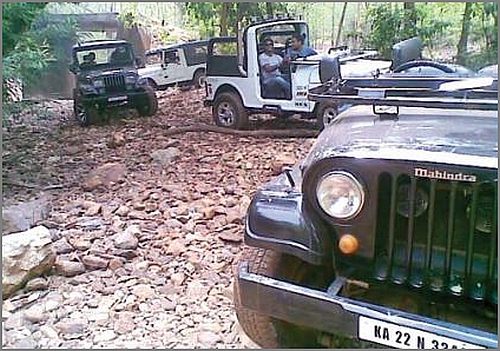 Goa may be known for its beaches, cuisine and its beauty, but there is more to know when it comes to cars and particularly offroading. Yes you guessed it right Goa is also one good place for little off roading  and off the track driving.

On May 9, a group of enthusiastic youth organized an off-road rally to Krishnapur. The rally was flagged off from Valpoi and navigated by Mr. Sayyad Sarfaraz.

“ Mr Sayyad informed that initially the track was very easy; however, it becomes rough due to pre-monsoon showers which lashed the state a week ago. “Two vehicles got stuck in the marsh and had to be pulled out with the help of a winch,” he informed.”

Subsequently, they managed to cover the track within 5 hours and reached the spot. They also interacted with a few villagers and came to know that the residents here visit the town once in a month where they manage to do their shopping and medical check ups for their children.

One of the youth who participated in the rally says “The track is very good for an off-road rally and in future will create an identity for the Sattari area as an ideal spot for such activities.”

Krishnapur with its dense forest and cool climate is around 27 km away from Valpoi. A settlement of about 10 families lives here in an extreme environment. Villagers stay only for the summer and move to Khanapur during the rains as the route is inaccessible during rainy season.

The village is famous for its greenery and is coming up as a refreshing tourist spot. Many domestic and foreign tourists visit the place to experience the adventurous river crossing at Krishnapur.This was the third time that Mr. Sayyad Sarfaraz has navigated such off-road rallies.

Last year he had organised a rally which saw around 50 participants taking part. “It’s not a spectator sport but a passion for adventurous activities and all the like-minded people participate in this type of rally. Very soon, we will be going to host a similar type of off-road rally to Krishnapur in the rainy season to try and experience the life of the villagers who are settled here,” piped another member of the group.

It is also learned that nearby existed a site where water sports has gained popularity and most foreign tourists visit this spot to experience these sports. Such sites are to be upgraded and promoted for tourism and ultimately will generate income for the state, opined the group.

Another such event is organised by Mahindra- The Great Escape which is in the month of August.

Keep tuning to Goa on Wheels for more details.