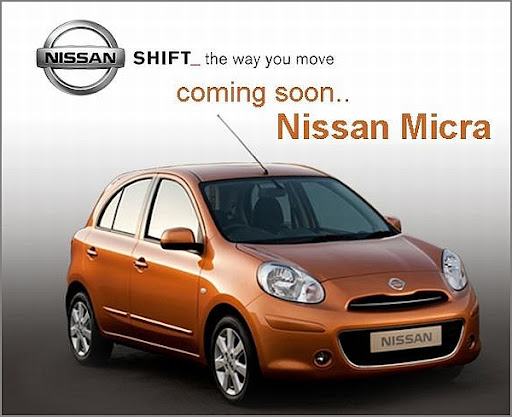 Nissan is all set to launch its much-anticipated small car Micra in India in July.

“The new Nissan Micra will be launched nationwide on July 14, 2010,” the company said in a statement. The company’s wholly-owned subsidiary, Nissan Motor India, will roll out the new Micra from its recently inaugurated facility at Oragadam near Chennai.

The Nissan Micra, which comes with a 1.2 litre petrol engine, will compete against Maruti’s Swift & Ritz, Hyundai’s i10 and i20 and Chevrolet Beat, . The Nissan Micra could priced between 3.90 lakhs to 5.5 lakhs.

Nissan Motor India, recently roped in Bollywood actor Ranbir Kapoor as brand ambassador, had started bookings of the car in end of May and has so far received 1,049 orders.

The new Micra will be produced in five countries including Thailand, India, China and Mexico. The fifth location is yet to be decided.

Nissan’s next big launch for the Indian market is the all new Evalia van which is also known as NV200 in some international market. The Evalia made its first public appearance at the 2012 Auto […]

Nissan launched the new Sunny Sedan in India. The car is launched in 3 variants XE, XL and XV. Nissan has sold no less that 16 million units of all Sunny generations around the world […]