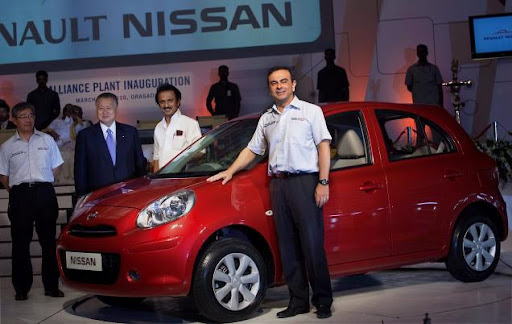 Nissan has invested over Rs. 2000 crore for a new car plant near Chennai and will be soon launching its small car Micra the company’s first India-made car, by around July.

The Micra, that would be the company’s volume driver in India, would also be the car that Nissan would sell in European and other key export markets.

“ India’s strength in manufacturing world class compact cars and its cost-effectiveness in the production process, will help the country to be the hub of small cars for Japanese car major Nissan, feels the company’s global COO Toshiyuki Shiga.”

Nissan has also announced its intention to make an entry-level car — in the Rs 2.5 lakh price range — for which it may partner Hinduja group company Ashok Leyland. Besides its has tied up with Renault & Bajaj to launch the ultr lowcost car for India which will compete with Tata Nano

Renault India made a strong presence at the 2012 Auto Expo. The French company launched the Pulse hatchback and also unveiled the Duster SUV which is soon going to hit the Indian roads. The Duster […]

Nissan has opened its first dealership in Goa, AM Ventures. The new dealership is located in Nagoa Verna, Off NH 17. It looks like Verna is slowing shaping into a small hub with all dealers […]

Renault India plans to launch upto 5 models in India  including a compact car, in India between 2011 and 2013. In the run-up to the planned launch of its first products — luxury sedan Fluence […]