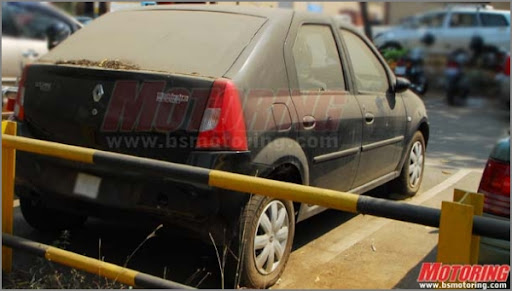 Business Motoring, has got the first visuals of the shortened Renault Logan that will be introduced in India very shortly. This picture confirms Renault will continue its partnership with Mahindra for selling the Logan in India.

Since the excise duty benefit also entails an engine up to 1200 cc for petrol and 1500cc for diesel, Mahindra Renault could continue with the existing diesel engine but none of its petrols would help it get the benefit.

One option they could exercise is the Nissan Micra’s 1.2-litre unit that could be brought in for the job, subject to engineering requirements such as mounting points and other allied tweaks. The 1.2-litre engine with 80 bhp is being assembled at Nissan’s facilities off Chennai for the Micra, with components coming in from various countries, including Japan and Thailand.

The Logan’s position in the C-segment has been dwindling over the last two years. When it was launched in mid-2007, it immediately captured a significant share of the market, selling as high as 3000 units a month.

But sales started to fall towards the end of the first year and just last month Mahindra-Renault moved out less than 250 units. Some of the key reasons for the Logan’s poor sales have been attributed to its dated design, lack of features and a higher price tag than more contemporary cars like the Maruti Suzuki Swift Dzire and the Tata Indigo Manza.

At a time when most automakers have gone for a price rise following the excise duty hike in the Budget, dealers of the troubled Mahindra Renault across the country are offering up to Rs. 50,000 […]