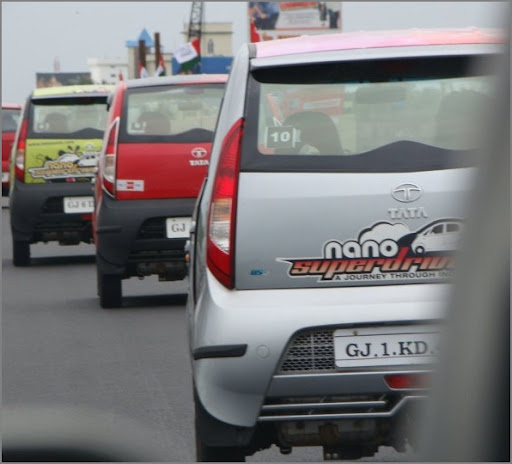 The Tata Nano Superdrive caravan, which travelled a distance of 15,000 km, touching 36 cities across India, today concluded its 26-day voyage in Mumbai. The cars were flagged in by Mr. Ratan N. Tata, Chairman, Tata Sons & Tata Motors, in the presence of Tata Motors’ senior management.

The Tata Nano Superdrive, comprising 9 Tata Nanos, each festooned with a theme, had started from Sanand on June 2 to celebrate the inauguration of the plant. The cars travelled across India on three different routes. Each route was christened after our tri-coloured national flag namely ‘Saffron Route’, ‘White Route’ and ‘Green Route’, keeping with the theme of the country-wide drive.

The Superdrive branded Nanos were absolute traffic-stoppers as they visited prominent landmarks in every city. Citizens at these landmarks greeted the people’s car with immense excitement. Prospective customers were given an opportunity to drive them and enjoy the cars in the real world. At malls, shoppers were given an up-close experience with the car and its unique features. To celebrate the car’s first year, Tata Motors also organised a celebration ceremony for Nano owners in every city.

Tata  Motors which witnessed very low sales in  November, is now firing all its guns to get on track and to increase the sales of its smallest car “Tata Nano”. Tata Motors has released three […]

Tata takes the Nano for a Twist

Tata motors had successfully bedazzled everybody’s mind  at the launch of the  Nano, -(nano is not Tata’s flagship car). – Tata Motors has gone one step ahead now,  with the addition of new features and […]