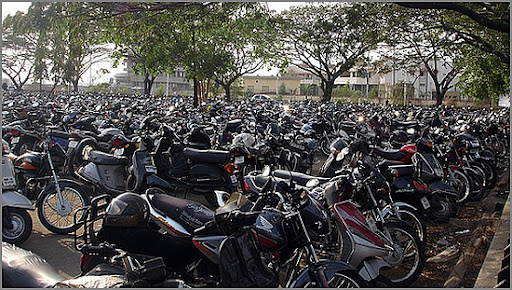 Indian two-wheeler industry has acheived a key milestone of making and selling one million units, in March. For the first time, the industry also crossed the 10-million mark in a fiscal by selling 10.5 million two-wheelers in 2009-10 . In 2009-10 , total two-wheeler sales were up by 24.52%, over the previous fiscal which stood at 8.4 million.

The market is dominated by motorcycles accounting for nearly 77-78 % of all sales, scooters sell around 15-16 %, and the rest by mopeds. With these heady numbers, India has emerged as a strong competitor to China , the largest two-wheeler market with 15 to 16 million bikes.

However, China’s electric two-wheeler market is another 10 million strong. In India , e-bike hasn’t taken off yet.

TVS Motor reported a 24 per cent growth in March this year. The company registered sales of 1.46 lakh units in March. Bajaj Auto today reported 85.12 percent jump in its motorcycle sales at 2,44,828 units in March. BAL attributed the growth to robust sales of Pulsar and Discover range of bikes.

DPC Motors dealers for Mahindra & Mahindra in Goa are looking for young and dynamic sales consultants. Job requirements: Education 12th or graduate, Experience- one year in year in MUV segment. For desired candidate, salary can be […]

Toyota raises prices of its vehicles

Toyota Motors raised the prices of its vehicles by up to Rs. 23,000 on account of rising input costs and modification of engines to conform to emission norms, coming into effect from April 1 2010.

A blend of Genius performance and gorgeous style,that’s what Toyota has to say about the all new facelifted Corolla Altis. The car gets a new face and LED tail lamps at the rear. The New […]