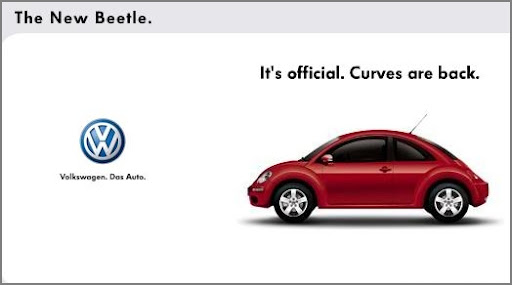 Volkswagen India has launched a new campaign for the Volkswagen Beetle. After the car’s launch late last year, Volkswagen has made some minor design changes to the car and the new campaign looks at reiterating the car’s ‘Curves are back’ positioning.

Bobby Pawar, chief creative officer DDB Mudra, said, “ The Beetle was launched at a time when everyone was running towards size zero and anorexia. With this new commercial we are trying to show that people actually desire curves. The Beetle is a very curvy car. It has never been a car that follows a set pattern. When everyone was looking to go big, the Beetle stayed small. It has always been more than just a car.”

Check out the Ad Video

VW to showcase 4 Up! Concepts at Geneva Show

The Up! May or may not come to India soon, but it will definitely come in 4 new avatar at the 2012 Geneva Motor Show. The new up! range is growing, with the unveiling of […]

More details and images of the soon to be launched VW Polo GT 1.2 TSI

Volkswagen will launch a new variant of the Polo hatchback to replace the 1.6 with a new powerful and fuel efficient 1.2 TSI petrol engine. We reported yesterday of the car to be launched next […]