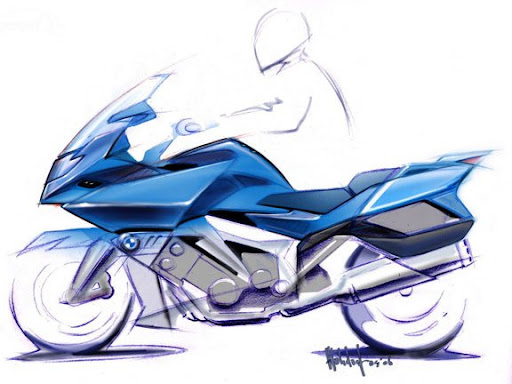 BMW teases its new KT 1600. Shown  at the EICMA Show in Milan, BMW’s concept motorcycle, the KT 1600, is powered by a unique six-cylinder engine.

BMW has plonked a new  1649cc which pumps  160hp at 7500rpm and of torque at 180Nm @5000 rpm. BMW will offer 2 models: GT and GTL. The GT, which is a sport touring bike while GTL will feature supersized seating surfaces, a more relaxed riding position, and a full set of luggage.

BMW KT 1600 will feature all kinds of electronics goodies, including ride-by-wire throttle control with three modes: Rain, Road and Dynamic. There will also be traction control and ABS brakes, along with BMW’s ESA II electronically adjustable suspension.

BMW has created a new headlight that can level itself, regardless of how much load is on the bike. There is also an optional system that can follow the road ahead, even when the bike is leaned over in the corners.  No official on-sale date has been announced, but it is expected the K1600 will hit the market as a 2011 model.

Will BMW launch the new 3 Series on 19th July? Are you ready for the new Beemer?

BMW India may have been a little shy in 2012 with no new models in the first six months. On the other hand it’s rival Audi and Mercedes-Benz has launched a couple of new products […]

BMW reported 26.56 per cent jump in sales in March at 605 units, the highest ever sales that the company recorded in a month in India. BMW had sold 478 units in the same month […]

Just a couple of days back we posted of the BMW X1 facelift which is expected in India soon. BMW X1 is facing the heat from Audi Q3 which has stormed in the market with […]