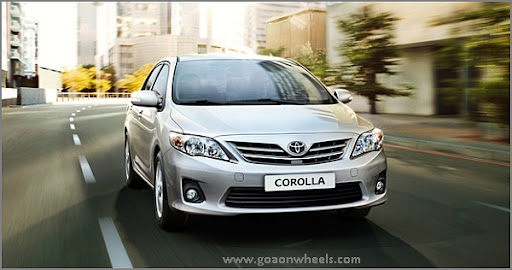 Toyota is planning to launch Corolla Altis diesel in July.

Toyota which initially planned to launch the Corolla Altis diesel in august have pull pulled back plans and will launch the car in 3rd week of July.  The car will be available in 3 trims and will cost around Rs. 75,000 to 1.25 lakh more than the current petrol Corolla Altis.

The Corolla will be powered by a 1.4-litre CRDi turbo diesel producing 90bhp mated to a 6-speed gearbox. According to Toyota, the Corolla diesel has achieved a fuel efficiency figure of over 21kpl.

The Corolla is already the best seller in segment and now with a diesel powerplant it will only be boost its sales.

Ford India launched a special edition of its mid-sized sedan Fiesta in the country, priced at Rs. 6.44 lakh (ex-showroom, New Delhi). The new Ford Fiesta 1.6 ZXI will be available only in the petrol […]

Two wheeler maker TVS Motors have opened a new showroom in Panjim. The new showroom, is located at the new  Taligoa-St. Inez by pass. TVS has displayed the latest Jive clutchless motorcycle and Wego Scooter. […]