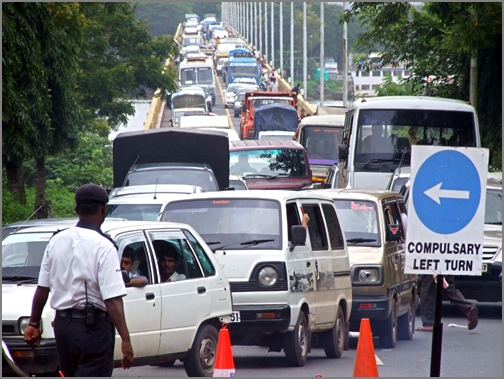 The Deputy Superintendent of Police, traffic south, Mr. Gajanan Prabhudessai  said that the Margao traffic cell launched a drive against violation of Motor Vehicles Act and Rules and booked in all, 11,791 offences, of which, 11,768 were compounded since January 2010.

He said that fine of Rs. 12,62,800 were collected from defaulters during this two and half month period. The main objective of the drive was to bring traffic discipline and better road sense, among motorists.

Mr.  Prabhudessai said that cases of sounding and using harsh horn, parking in no parking zone, driving without uniform, over speeding, failure to issue ticket to passengers, etc were booked. Cases like driving vehicle in no entry areas, driving vehicle without license or permit and driving under the influence of alcohol were also booked.

Fines were also levied where vehicles were found to have registration plates, which were not in conformity with the stipulations.

In other cases, drivers who did not have the mandatory Pollution Under Control (PUC) certificates were booked. Other cases involved private vehicles being used as tourist vehicles, no tax remittance challans and vehicles without insurance cover and registration certificates.

It was also pointed out that no lights, other than those permitted in the Motor Vehicles Rules can be fitted on the vehicle. This includes spotlights, searchlights, mercury lamps and moving fancy lights. Dome lights are also not permitted, unless specifically authorised.

Mahindra launched the Genio pick-up based on the Xylo platform in January. The Genio starts at Rs 4.99-lakh (BS 3 variant) and is powered  by a mDI CRDe 4 Cylinder 2489 cc engine. Check out […]