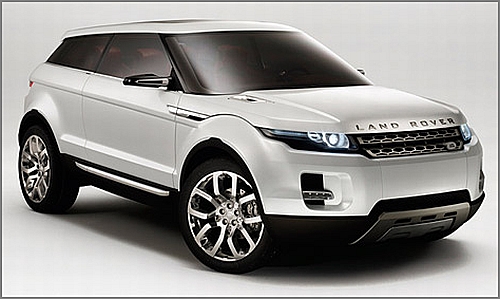 Land Rover has confirmed that a production version of the LRX concept car will be built. The new car will debut at Paris Motor Show later this year and join the Range Rover line-up in 2011.  Designed and engineered at Land Rover’s state-of-the-art Gaydon facility, the new Range Rover will be the smallest, lightest and most efficient Range Rover ever produced.

The cross-coupe was unveiled at the North American International Auto Show in January 2008. In March this year, Land Rover achieved record global sales of more than 24,000 vehicles – 43.1 per cent more than a year back. It has done better in most markets, particularly Europe and emerging markets.

China had its best quarter ever, with sales up 192 per cent year on year, while sales in Korea have risen 149 per cent. The UK remains the largest market for Land Rover, with North America second and China third.

The Land Rover DC100, a modern interpretation of the iconic Land Rover Defender will make its debut at the 2011 Frankfurt Motor Show. Land Rover has also confirmed, that production of a new Defender is […]

Jaguar Land Rover to get locally assembled in India

Land Rover is all set to launch the new Discovery Sport in India on September 2nd 2015 and have started accepting bookings at all authorised Land Rover retail outlets. The company has so far received more […]