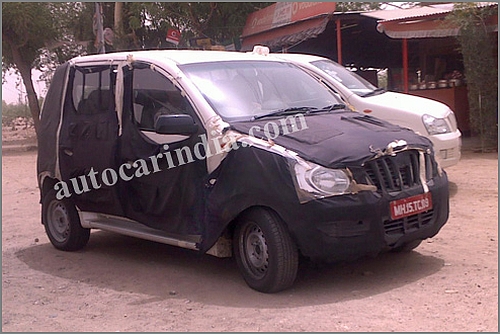 Some time back there was news that Mahindra was planning to launch a smaller SUV to take on the Premier Rio.  Well that is going to be certain now.  Mahindra is developing a smaller version of the Xylo (or just disguised as Xylo ).

The mini SUV/Xylo which is undergoing testing will be less than four-metres in length and will come with a diesel engine under 1.5-litres to qualify as a ‘small car’ to avail of a substantial 12% saving in excise duty.

The mini SUV/Xylo uses a shortened version of the present Mahindra Xylo’s body-on-frame chassis and the current 2.5 CRDE engine has been downsized as well. The engine capacity has been reduced from 2.5-litres to under 1.5-litres by eliminating one cylinder (the mini SUV/Xylo will have a three cylinder engine) and reducing the bore and stroke. The miniSUV/ Xylo will only have two rows of seats and hence a maximum seating capacity for five passengers.

We expect the pricing close to 5 lakh mark for the base version. Mahindra Xylo is successful and they expect a similar success from this model too. This would also help Mahindra cater to the Metros as the choices aof a smaller SUV is less due to BSIV emission norms as Bolero VLX is the only model sold in Metros.

Ford India is getting aggressive in the Indian market and has announced that it will build a second plant in Gujarat comprising of a state-of-the-art vehicle manufacturing facility and an engine plant in Sanand, Gujarat. […]

Once again the Xylo facelift was spotted testing on the roads of Nashik, near to the Mahindra factory. The tow-wheeler to truck maker will launch the new facelifted Xylo in 2012. Mahindra is testing the […]