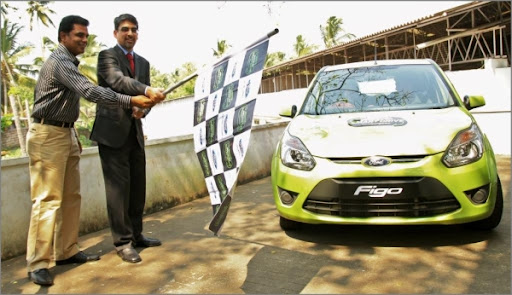 To celebrate the incredible success at top auto award events in recent weeks, including bagging the covetedIndian Car of the Year 2011 title, Ford India today kick-started the celebrations from Calicut with its first regional Discover Smart Drive across the state of Kerala.

During the 600 KMs journey across Kerala, the chosen lucky couple Krishna Prasad & Rajashree Raghavendra from Bangalore will get a lifetime opportunity to discover scenic tourist destinations in the Ford Figo—one of India’s most awarded and popular cars.

Aimed to explore God’s own country in India’s own Car of the Year, the regional Discover Smart Drive will connect consumers around Ford dealership(s) in Trissur, Kochi, and Kottayam before culminating in Trivandrum.

Aptly described as a celebration of the best-in-class features, style, comfort and ownership, Ford Figo continues to stir car buyers’ imagination with its smart and substantial features along with over a 60,000-strong customer base.

From becoming the second fastest car to reach the 50,000 sales milestones to winning country’s top auto awards, the Figo has continued to create history since its launch in March last year.

To add to this excitement of driving country’s best loved car, the lucky couple will have a thematically designed Figo for the occasion to add more fun and festivities.

The celebratory Figo will also have a companion – the thematic 50,000th Figo – designed by popular television host Harun Robert (better known as Rob) – accompanying it through Kerala. Both these celebratory Figos have been brought to the state especially to make the drive even more special for the couple and consumers.

“With Figo, customers across India have discovered an outstanding value for money product that meets their growing aspirations. Much to the delight to Indian families, Figo offers a unique combination of design, space, safety and technology. It is extremely heartening to see the Figo resonating with so many Indian customers and also gratifying to win some of the top auto industry honours.” said Anurag Mehrotra, Vice President, Marketing, Ford India

“With Discover Smart Drive in Kerala, we wish to thank customers for placing their confidence in the Figo and invite them to experience the substantiality that Figo offers.” he added.

Chosen through a contest amongst facebook fans, Krishna & Rajashree will have the opportunity to explore the scenic wonders during the drive along with an assured smooth drive on Figo. Their drive will include the following exciting legs:

§  Experiencing Calicut: Driving the spicy coloured Figo in the spice capital visiting Vasco-De-Gama’s Stone Memorial and to the world renowned beaches  including Kappad

§  Experiencing Thrissur: Representing Figo’s modernity against the cultural capital of Kerala and soaking in the culture with visits to the famous temples and to Asia’s tallest church

§  Experiencing Kottayam: Sheer fun of driving  and feeling the difference in the backwater capital of Kerala from the panoramic Vembanad  Lake to the Kumarakom Bird Sanctuary

§  Experiencing Trivandrum: Coming to the end of the drive but staying connected with Bluetooth in the capital city of Kerala; visiting the 17th century Anchunthengu Fort to Aruvikkara – A pilgrimage and recreation centre; Not to forget the space in Figo boot for fishing!

October has officially become the month for car launches with most carmakers launching either new products, facelifts or variants of its existing products. Ford too will join the wagon with the launch of the Figo […]